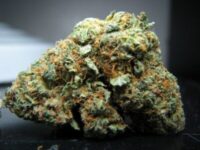 Bubba Kush is a cannabis seed with multi-awarded parents: Afghan and OG Kush. Compact in structure, the huge leaves of this wonderful marijuana plant have to be removed sometimes to allow the formation of flowers and thus reach its true potential. Flowering fast, it develops beautiful, round, compact buds brimming with resin. It grows happily in a small space indoors and enjoys dry, sunny, temperate and Mediterranean climates and the comfort of a

Bubba Kush is an indica strain that has gained notoriety in the U.S. and beyond for its heavy tranquilizing effects. Sweet hashish flavors with subtle notes of chocolate and coffee come through on the exhale, delighting the palate as powerful relaxation takes over.

The breeder whom this strain was named after states that Bubba Kush emerged just after 1996, when an?OG Kushhybrid pollinated an unknown indica strain obtained in New Orleans. The mother plant was supposedly?Northern Lights, but the genetically ambiguous indica was simply called ?Bubba.?

The genetic history of this strain can be traced back to the Hindu Kush mountains; however, its complete history is almost unknown due to poor documentation. Bubba Kush is 100% indica, so you can anticipate a relaxing body high that will leave you couch locked. Many patients prefer this strain due to its ability to alleviate
Although Bubba Kush cannabis can relieve many ailments, it is not a daytime strain; that is unless you plan on sleeping your day away. Upon smoking, you will be introduced to an earthy and sweet taste accompanied by a piney scent. Bubba Kush has vivid green and purple buds that are coated in amber hairs. 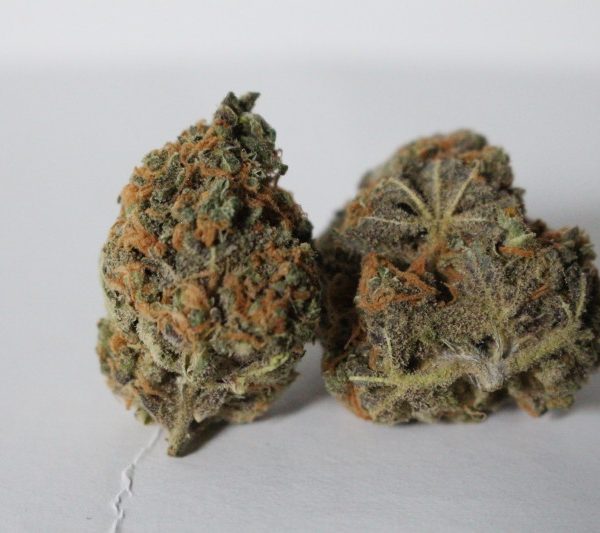 $245 – $1,790
Hawaiian Haze Marijuana Strains is a mostly sativa strain that produces some high-quality sativa effects. A mix of Hawaiian?and Haze?genetics,?these light, airy buds will have your head in the clouds. Many users also report that it makes them sociable and talkative, so it may be a good daytime medication. Hawaiian Haze?s floral smell and taste of tropical fruit might just have you daydreaming about an island vacation. These plants grow tall and flower slowly, taking between 12 and 14 weeks, so they are probably better suited for a grower with some experience and patience.
Add to wishlist
Select options
Quick view 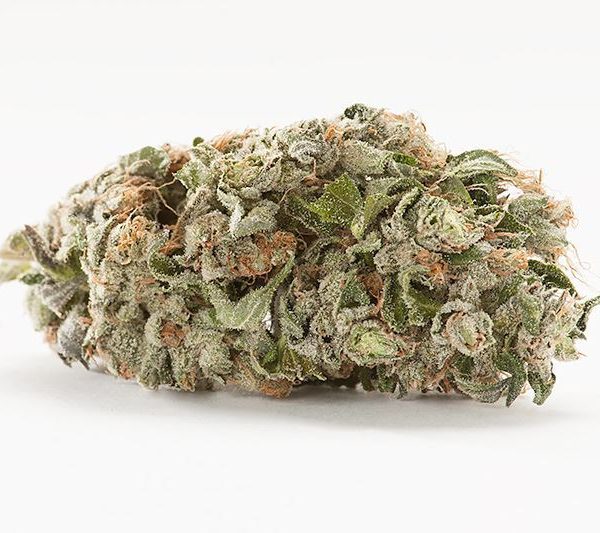 $219 – $1,866
This strain is renowned for its very melon and sweet smelling buds. This translates into a very nice taste and smoothness on both the inhale and exhale. The high is heady hitting in the temples and eyes. She is a good yielder and an easy to grow plant that is a fast finisher. Mild Haze qualities with an expansive smoke and good resin production results in great water hash. This cross was made with seeds acquired by D & A separately from trusted friends. The Cannalope is a great strain to breed with because of it's low flowering time. 1st CABA Cup 2010 Buenos Aires 2nd Sativa IC420 Breederscup 2005 3rd Sativa IC420 Breederscup 2004
Add to wishlist
Select options
Quick view 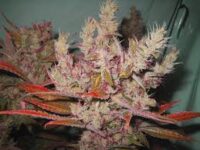 $230 – $1,700
Cookie Dawg is a combination of two great flavors?GSC and the legendary strain Chemdog (aka Chemdawg). Cookie Dawg is an indica-dominant cultivar that's high in THC, producing intense relaxation in some consumers, followed by sedation and appetite; it?s for veteran tokers. Cookie Dawg has a complex, savory aroma combining the complex sweet, toasted smell and taste of Cookies, with the biting, chemical pineyness of Chemdog. This scrumptious strain is savory, with a chemmy fuel finish. Many growers have sought to combine the much-hyped Cookies and Chemdog, so look out for name variants like Dawg Cookie, and Dog Cookies, as well as offspring like Lemon Dog Cookies, Purple Cookie Dawg, and
Add to wishlist
Select options
Quick view 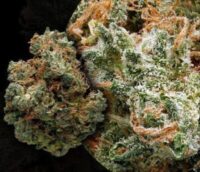 $189 – $1,463
Not to be confused with the citrus-flavored soda of the same name, Cactus Cooler is a sativa-dominant strain that bursts with interesting flavors. A cross between the ever-popular Blue Dream and old standby OG Kush, this bud offers consumers a buzzy, upbeat head high that slowly gives way to a soothing body stone. Cactus Cooler?s THC content has been measured at between 14% to 23%. When trimmed, Cactus Cooler?s large flowers maintain a chunky, spade-like shape, tapering from a broad base into a narrow, pointy tip. The buds have an internal structure characteristic of indicas, with dense, tightly-packed leaves. The leaves themselves are a mild shade of sage green and are shot through with curly orange pistils. Finally, sticky, dewy-looking trichomes coat all visible nooks and crannies of Cactus Cooler?s flowers, accounting for their potency and making them hard to break up by hand. While the soft drink Cactus Cooler has a distinct orange and pineapple flavor, the strain isn?t quite as tropical. A first whiff of the cured flowers may pick up on earthy notes of wood and leather, while close inspection tends to reveal some of the fruitiness associated with parent strain Blue Dream. Grinding up the flowers, meanwhile, gives off some of the spice and hash that are characteristic of the bud?s Kush lineage. When combusted in a pipe or a joint, Cactus Cooler gives off a rich but very smooth smoke that?s easily inhaled. This smoke has a fruity flavor on the exhale, mixed with some hints of pine. Cactus Cooler?s high is something of a creeper and may require up to 15 minutes after smokers have consumed its tasty smoke to begin exerting its effects. At first, smokers might notice tics like a sped-up pulse around the temples and behind the eyes; an increase in salivation in also sometimes reported. Soon after they arrive, these physical sensations are supplanted by a change in cognition -- thoughts may run through the user?s mind more quickly than usual or may flow from one to the next in a surprising, freely-associative way. Ideas can also take on a newfound intensity. In all, this elevated cerebral mindset can help busy smokers focus on detailed and analytical tasks, whether they?re work-related or tied to personal projects. On the other hand, the ongoing internal chatter that Cactus Cooler provides can be a great way to add some background stimulation to otherwise boring jobs like cleaning the house or running errands. The strain?s tendency to turn up the volume on internal monologues can also have the effect of inspiring good conversation in social situations, even when shared with strangers. As the high wears on, Cactus Cooler starts to reveal its layers of physical relaxation. Lingering muscular tension may find release as a palpable tingle works its way down the neck and through the core. Although users can maintain the initially brainy, tuned-in energy, they may be less likely to exert themselves and may instead prefer to kick back in comfort at home. Because of its gradual decline in energy levels, Cactus Cooler is recommended for consumption between late afternoon and evening. Cactus Cooler can also have several applications for medical cannabis patients. The focused mindset that comes with its onset may be a boon to those with attention deficit disorders. The bud?s smooth euphoria can also temporarily relieve symptoms of stress and depression. Physically speaking, Cactus Cooler may dull sharp aches and pains, as well as inflammation-related conditions like headaches and cramps. Because its early effects can include some paranoia or overly intense introspection, Cactus Cooler is not recommended for patients who are prone to panic or who have a low THC tolerance. Seeds of Cactus Cooler are not available for sale online and those wishing to grow the strain at home should seek out clippings that can be propagated as ?clones.? Once obtained, the plants can be grown indoors or out, although outdoor cultivation calls for a semi-humid, Mediterranean-like climate. Plants tend to grow short and bushy with a typically indica silhouette. Cactus Cooler generally flowers within 8 to 9 weeks when grown indoors. Combining the even-tempered relaxation of Blue Dream with the physical sedation of OG Kush, Cactus Cooler is a must-try for fans of either of its parent strains. This bud?s unique flavor may also be of interest to terpene nerds.
Add to wishlist
Select options
Quick view 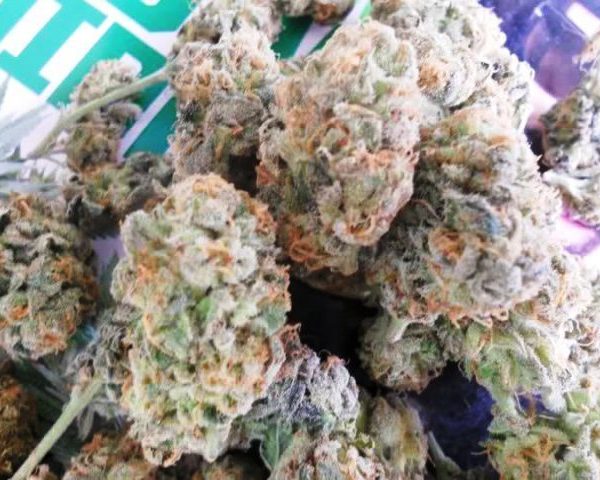